Carlson boys soccer team captured its first district title since the 1990s on Saturday. The boys made our school very proud and represented us with a tremendous effort on the pitch. Jared Posliako and Justin Meyers scored goals in the district final for the Marauders, but it was a team effort to get the big win.

“This feels good for the boys. It’s a fantastic group to coach,” said Carlson Coach Mario Parody. “The chemistry is there this year, we’re not lopsided on the field, it’s a nice yin-yang dynamic. We even have the luxury of having a bench, that when you put them in, they can deliver, as well, so they had the hunger and that’s why they’re here.” 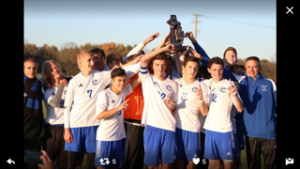