The Carlson volleyball team hosted their 8th annual Volley for a Cure game on Thursday, October 20, 2016 against Downriver League foe, Taylor Kennedy.  The Marauders won the match in 4 sets, 25-15, 23-25, 25-14, 25-22, and improving their league record to 6-6.  The event helps raise money for the Susan G. Komen Foundation and the fight against breast cancer and is the one time of the year that the Marauders don pink uniforms rather than their traditional blue and white.

The team was led by outside hitter Hannah Moner, who had 11 kills and three blocks for the day, and setter Hannah Sullivan, who had 20 assists along with four kills.  The team played a balanced defense for the day with a sideout ratio over 50% in all three of their winning sets.  Other strong performances were turned in by middle blocker Sidney Magoon (6 kills, 15 service points) and outside hitter Bethany Dillon (5 kills). 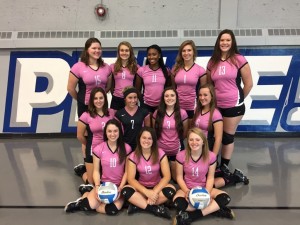 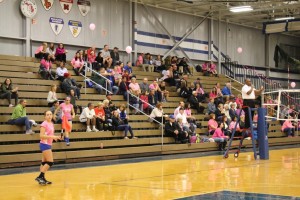 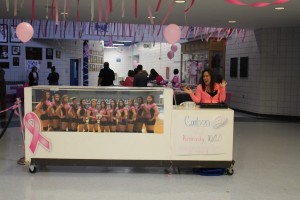 Carlson’s Volley for a Cure event was the first event of its kind at the school and in the Downriver area when it was first introduced in 2009; it has been replicated in some way in almost every sport in the school.  All three levels of the volleyball program participated in this year’s event, decorating the Memorial Building and wearing pink.  This year’s event helped to raise over $700 for the cause through a bake sale and raffles.