It’s time to recognize the January Zeal Credit Union Athletes of the month! Congratulations to this month’s winners, Carl Pate & Kayla Everingham of Trenton High School! Both Carl & Kayla will be receiving a pair of wireless bluetooth speakers and winners certificate courtesy of Zeal Credit Union.

If you voted in this month’s contest, you could win a $100 gift card courtesy of Zeal Credit Union. The winner will be announced in the next couple of weeks and will be notified via email. Check out Zeal CU on Facebook and Twitter! #ZealTheLove 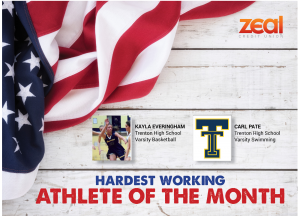 Kayla Everingham | Trenton HS | Basketball
Kayla led the team in a win over AP. She had 17 points, 6 rebounds, 2 assists, and 2 steals, while going 5-7 from the stripe.

Carl Pate | Trenton HS | Swimming
Carl Pate is continuing to impress for the Trojans this season. He dropped another second in his 200 IM with a time of 2:29.14 vs Woodhaven.
Have a deserving athlete to nominate for Zeal’s Athlete of the Month? Click here to submit your athlete nomination for next month’s contest.

Male Nominees:
Elisha Warren | Woodhaven HS | Basketball
Elisha has had a solid performance to date for the WHS team. He led the team to a victory over Allen Park with 24 points including three made triples.

Tyson Acuff | Cass Tech | Basketball
Tyson has been a presence on the court again this year, including a double-double in points & rebounds vs. Detroit Northwestern Collegiate.